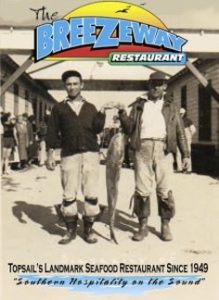 The Breezeway Restaurant and Motel is a tradition on Topsail Island. Long famous for its fried seafood and hushpuppies, the Breezeway now features a diverse menu that offers something for everyone..

The original Breezeway Inn and Café, which opened in 1949, was housed in the “Project: Bumblebee” barracks and mess hall. The roasted oysters were a hit with servicemen stationed at nearby Camp Davis in Holly Ridge and the café’s reputation grew.

Over the decades, the Breezeway was witness to the continuing development of Topsail Island. The original Breezeway Inn and Café buildings were replaced with the current Breezeway Restaurant and Motel in 1972, but one thing that will never change at the Breezeway is its delicious food and Southern hospitality.
​
Located at the southern end of Topsail Island, the Breezeway is 6.2 miles south from the Surf City stoplight and it sits right at the water’s edge.  Sailors and Motor Boaters:  Turn in at Mile Marker 7 and dock with us when you are our guest.   The Cherry Family invites you to join them for delicious seafood, hushpuppies, dessert and a spectacular view of the Topsail Sound. “No extra charge for Sunsets”